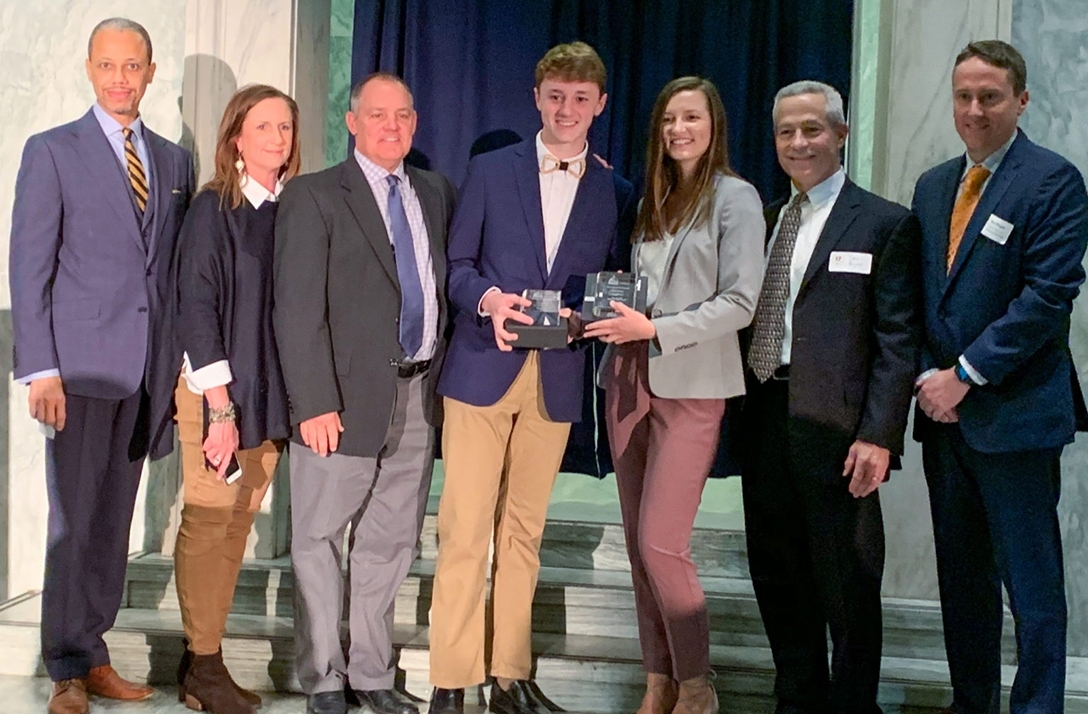 Johnson County Emergency Management & Communications joins the Mid-America Regional Council and GeoComm in congratulating the winners of the NG911 Institute’s Citizen in Action award. Claire and Seth Johnson, from Overland Park, were announced as the recipients of the Citizen in Action award at the 17th Annual 911 Honor Awards in Washington D.C. on Feb. 12. The Citizen in Action award recognizes an individual(‘s) efforts where there was exceptional bravery and heroism demonstrated while utilizing 911 during an emergency.

The nomination described how Seth and Claire called 911 during the winter of 2019 when their father, Mark Johnson, suddenly went into cardiac arrest. Claire placed the 911 call and a telecommunicator from the Johnson County Emergency Management & Communications Center instructed Seth and Claire to begin CPR. Seth had learned CPR at school less than two weeks before, and Claire had also learned CPR in school and when she was a lifeguard. The teens took turns doing CPR, carefully following instructors from the 911 telecommunicator, until paramedics arrived.

“Seth and Claire’s efforts, along with the 911 staff and emergency response system in the greater Kansas City metropolitan region, ultimately saved Mark Johnson’s life,” said John Bryant, President/CEO of GeoComm. “GeoComm congratulates everyone involved with this 911 response and is thrilled to be part of the NG911 Institute’s event that honors and recognizes Seth and Claire for their quick thinking, brave, and heroic actions.”

The Mid-America Regional Council (MARC) has coordinated 911 services in the Kansas City region since 1983 and serves as the coordinating agency for an 11-county area which handles almost two million emergency calls each year. The regional system is coordinated through a number of committees and task forces comprised of representatives of local governments. The system is served by 45 public safety answering points (PSAPs) operated by government agencies.

There is more data available than ever before and it just keeps growing.  Public Safety Location Intelligence® from GeoComm provides a new way to get the right location information, on the right map, for the right people, at the right time, in order to respond to emergency calls faster.

This website uses cookies to improve your experience while you navigate through the website. Out of these cookies, the cookies that are categorized as necessary are stored on your browser as they are essential for the working of basic functionalities of the website. We also use third-party cookies that help us analyze and understand how you use this website. These cookies will be stored in your browser only with your consent. You also have the option to opt-out of these cookies. But opting out of some of these cookies may have an effect on your browsing experience.
Necessary Always Enabled
Necessary cookies are absolutely essential for the website to function properly. This category only includes cookies that ensures basic functionalities and security features of the website. These cookies do not store any personal information.
Non-necessary
Any cookies that may not be particularly necessary for the website to function and is used specifically to collect user personal data via analytics, ads, other embedded contents are termed as non-necessary cookies. It is mandatory to procure user consent prior to running these cookies on your website.
SAVE & ACCEPT